a day & a drink to believe in
slowly, between like minds
smile through a fight
a dark joke & a light dinner
share this silent idea
composed in my apartment by me and a bf from times past .

My ADHD: Attention Drawn to a Higher Dimension

Recently at a super awesome David Wolfe event I attended in Cowtown I learned many profound things surround the following concept: the subtle energy of your food becomes your mind. I forget who’s words those are (Einstein?) but they’re fricken genius (obviously).

These words charge the passion that stirs within me…as the quality of my food (and water and thoughts for that matter) have been swirling in my consciousness for years now. That I understand and recognize these subtle energies shows that I’ve accepted this level of awareness into my being. Every choice that I make is articulated by that concept. And…communicating this message to others has become important to me…although I’m not sure how effective my efforts have been. I might have to work on my strategies, tactics & delivery.

I do wonder what space an individual’s heart & head has to be in to accept the notion of the subtle energies of food affecting their mind. I’ve talked to my family about these things for example…and to a certain extent they seem to logically understand. Yet their actions speak louder than words – still choosing to consume fast food, conventionally grown produce & meat and packaged goods, etc. which don’t exactly contain the subtle energy of illumination. Clearly there’s a disconnect.

I truly want to understand this disconnect better but I guess this is where I lose my steam – if the subtle energy of food resonated with them their choices would be different. I don’t want to judge – that doesn’t help…but then I don’t want to eat those foods either when they’re served up at celebrations, etc. To me, they’re GROSS. Disgusting really. So 80’s, and not the part of the 80’s worth reviving for the sake of style & entertainment.

Of course, they think what I eat is just plain weird too…but I’m just going to stick with it. At some point I know things are going to start smelling like roses for me all the time. On some dimension they already do. I just gotta tap into it. Meanwhile, until then, I’ll relish in the fact that I’m harnessing the energy of the best food available and let my mind sort out the rest.

Refreshing & delicious, this new age orange julius goes great with those lingering childhood memories of strolling through the mall on weekends or of hanging out in the food court after school acting all bad-ass n’shit.

Blend until smooth, pull up a hammock, and enjoy.

thanks malcolm saunders for the inspiration. 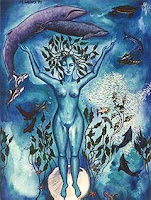 hmmm. for someone who advocates a healthy lifestyle, i sure find myself sick often. Just this week – after spending a week at a seminar eating less then preferred food (despite my best efforts), sitting in air conditioning and sleeping less than normal & traveling via airplane I find myself on the lip of a sinus-y mucous wave. Sure last week was challenging, but shouldn’t my immune system be super charged for these exact events?

Beyond my super sensitivity to ‘the norm’, I feel I should be at a place where my immune system has got my back any day of the week. Ugh. there’s that word – should.
In other words I aim to feel awesome everyday – I spring out of bed and all is dandy. And yet here I am…just a few weeks since my last bought of grossness. It makes me wonder, if my diet is in check for the most part, is it my environment that’s not serving me? is it my emotions? my thoughts? perhaps I’m allergic to my job.
I want to radiate health always – I don’t have the time for illness frankly. And being that I’m ridiculously open minded, I’ve tried EVERYTHING. From the best pills the pharmacy has to offer to the finest wildcrafted organic superfoods. There doesn’t seem to be a cure all for me. Perhaps I have an underlying belief system – it works for everyone but me. Reflecting on my whole life…I have to wonder what the reach is for this belief system of mine – in terms of money, relationships, health – do I genuinely feel that ‘it works for everyone but me’? I digress. We could discuss that for a week easily.
Of course, I could just accept this illness with open arms – allowing this purge to happen and recognizing that it’s ‘better out than in” and perhaps this ebb now will prevent a tsunami in the future. Oh thank you stuffy nose and nasty cough for expelling yourself from my system – making room for all the love, light, success and boundless energy I desire.

turns out: no one likes needy.

When it comes to being attractive to the opposite sex, does confidence trump nose jobs, weight loss and brand name clothes? I’m inclined to say that it does.

Let’s break it down. We all know that:

Once this happens, all the anxious-insecure-fear tainted behaviors these peeps weren’t even aware of vanish like a Criss Angel illusion. Instead, you’ll find a person that exudes an innate strength and certainty that not only draws positive situations and people into their lives, but that the opposite sex finds oh so sexy.