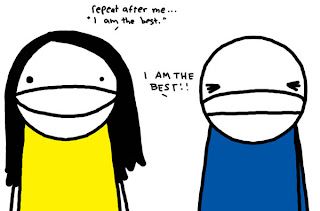 I’m feeling oh-so-reflective these days…and so i just need to dump my minds inventory online for public record. or my record. whatever. I read an article in synchronicity magazine over a year ago and it’s still swirling in my head. Enter mind dump.

If I stopped what I was doing right now and took an inventory of myself, I’d recognize that I have the capacity, talent, direction, mission & calling within myself to work towards my goals & dharma – as do the rest of us. it’s less about acquiring that special skill and more about ‘actualizing’ what we already have. We are the best; we are already enough!

American psychologist Abraham Maslow presented a theory of psychological health through studying people whom he called “self-actualizing”, or in layman’s terms: healthy & creative.

Carl Rogers, another an influential American psychologist, agreed with most of what Maslow believed, but added that for a person to “grow”, they need an environment that provides them with genuineness (openness and self-disclosure), acceptance (being seen with unconditional positive regard), and empathy (being listened to and understood).

I guess you can have great seeds & fertile soil – but without sunlight & water nothings going to grow.

In other words though, to self-actualize is to fulfill one’s potential and achieve the highest level of ‘human-beingness’ we can. And what better way to live than to enjoy being a human to to the max – creating the ultimate human experience for ourselves. fuck yeah. being human rocks!