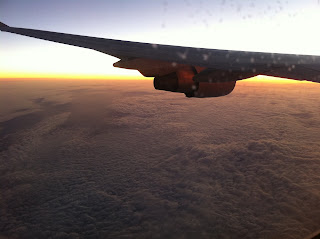 I’ve been exploring various expressions of freedom lately. Previously, I felt extraordinary independence hopping in my car and speeding off to wherever I wanted to go, whenever. Damn, that felt so good, especially since 9 times out of 10 I was headed somewhere awesome, in a kick-ass vehicle.
Now in place of my turbo charged wheels I have a turbo charged life. It looks great on paper for sure, but in reality I have to re-learn to feel independent…since driving fast down a stretch of highway on some adventure or running errands around town is currently not as close to my fingertips as it once was.
Last week I did rent a moped when I was in Bali. I felt like a motorized angel speeding down the roads with my butterfly dress flapping in the wind. This is the ultimate dessert.
Interestingly, one of the ways that has really fulfilled me lately (after feeling quite smothered due to my “independence outlet” not being in place) is through exercise.
It started with a 30 yoga challenge what was going well until two days of travel broke my streak (halfway through). I was loving the rhythm of getting up early every morning to yog, no matter what time I laid down at night. My dedication to myself has been reactivated.
Now in Hawaii I’ve added another rhythm to my body movement training – running. A great way to get to the beach and learn the lay of the land…..which is ultimately what I crave for myself to feel truly grounded.
The other day I was “namasted” by a passerby as I was running to the beach. It felt incredible to be acknowledged for my actions and reinforced the power of what I’m doing to feed my needs. The light in me was seen as I floated past my neighbourly friend.
Perhaps this is real independence – having body mind spirit primed for self-propelled movement. I can embrace this. At least until I manifest the best car ever.
......................................................................