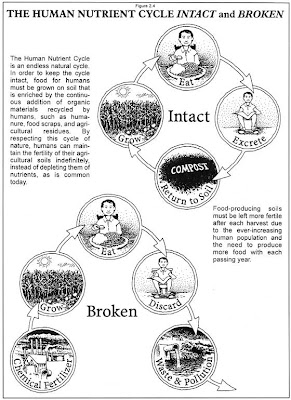 The way we deal with our shit says a lot about our society. With all it’s modern conveniences the ‘west’ has deemed itself civilized, but when we look at something as primal as taking a dump and how we deal with it – we really see how civilized we truly are. Looks like the loin cloth wearing pigmies of Africa might have one up on us.

Would a civilized society flush their poop back into the water they end up drinking? haha, of course they wouldn’t that’s just ludicrous. Oh wait. That’s what we do.
After a visit to The Hostel in the Forest, and having a taste for some sustainable living – it became clear that the proper CONSCIOUS disposal of our poop can have a profound affect on the cleanliness of our environment.
If we’re aware of not flushing poop with clean water down the toilet to become part of the sewage system, we are probably aware of not tossing other unfavorable things into the water simply because it’s comvenient. My utopian self would like to think that we’d behave this way.
The Hostel in the Forest was great just for this solitary observation – proper shit disposal – ….because at the end of the day it was a little too “hippie” for my tastes – the people here talk a little too slow and they didn’t have wifi there. I do recommend visiting if you have a chance. It’s quite an idyllic little place, and it’s cool that someone actually brought this from concept to reality.
Sure it’s great to unplug. But it’s also great to plug in and make things happen.
Anyway….back to flushing, i guess.